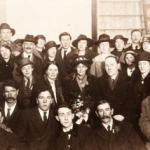 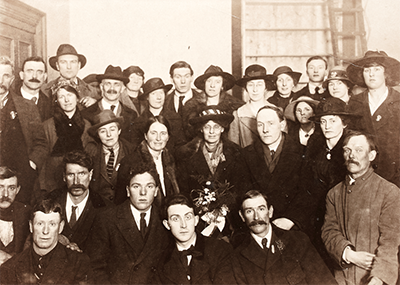 Markievicz at Liberty Hall after her release from prison in 1919 (National Library of Ireland).

On Thursday 20 September 2016 a new exhibition was launched at Richmond Barracks, Inchicore, Dublin 8, entitled ‘”You never saw such excitement”: The 1918 election of Countess Markievicz’.

The new exhibition, which is an addition to the permanent exhibition at Richmond Barracks, focuses on the two year period from the release of Constance Markievicz from Aylesbury Prison in June 1917 to her appointment as Minister for Labour in the First Dáil in April 1919, with particular emphasis on her election campaign and those that campaigned for her. The exhibition brings into sharp focus how many of the challenges faced by women campaigners one hundred years ago, remain relevant as contemporary challenges to women seeking representation today.

‘“You never saw such excitement”: The 1918 election of Countess Markievicz will be central to a series of drama and history workshops Richmond Barracks will programme with local school children, concentrating on historical role models, empowerment and advocacy for equal representation.

The exhibition will be available online in late 2018.

Learn more about Markievicz at Votáil100.