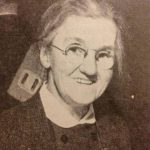 On 20 May 2014 the Rosie Hackett Bridge was officially opened in Dublin. Linking Marlborough Street with Hawkins Street, the bridge is intended to carry the cross-city LUAS BDX, and is open to public transport from 21 May. It is the first bridge over the River Liffey to be named after a woman: the Dublin-born trade unionist Rosanna ‘Rosie’ Hackett (1893-1976). One of the co-founders of the Irish Womens Workers Union (IWWU) in 1911. Having been sacked from her job in Jacob’s biscuit factory for union membership during the 1913 Lockout, Hackett remained involved in the IWWU at its headquarters in Liberty Hall. She gravitated towards the Irish Citizen Army and was active during the 1916 Rising, being briefly imprisoned in Kilmainham Gaol for her involvement in it. She remained active in the IWWU until her retirement in 1957. Here name was chosen from a list of suggested names for the new bridge by a decision of Dublin City Council, following a campaign by members of Labour Youth.

Speaking at the opening of the bridge, Minister for Transport, Tourism and Sport, Mr Leo Varadkar TD, observed that ‘the opening of the Rosie Hackett Bridge today is a strong statement. It is a recognition that we for too long have forgotten our own history. For too long we have accepted a lopsided account of our past, and the Irishwomen who worked heroically with Irishmen to create a  new future. Rosanna Hackett was just one of many women who played a crucial part in our history. But by honouring her, we honour all those who have been unjustly forgotten’.

Read Rosie Hackett’s statement to the Bureau of Military History.

Learn more about the Rosie Hackett Bridge, from Bridges of Dublin.

Watch the RTÉ report on the opening of the Rosie Hackett Bridge.