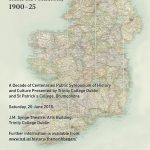 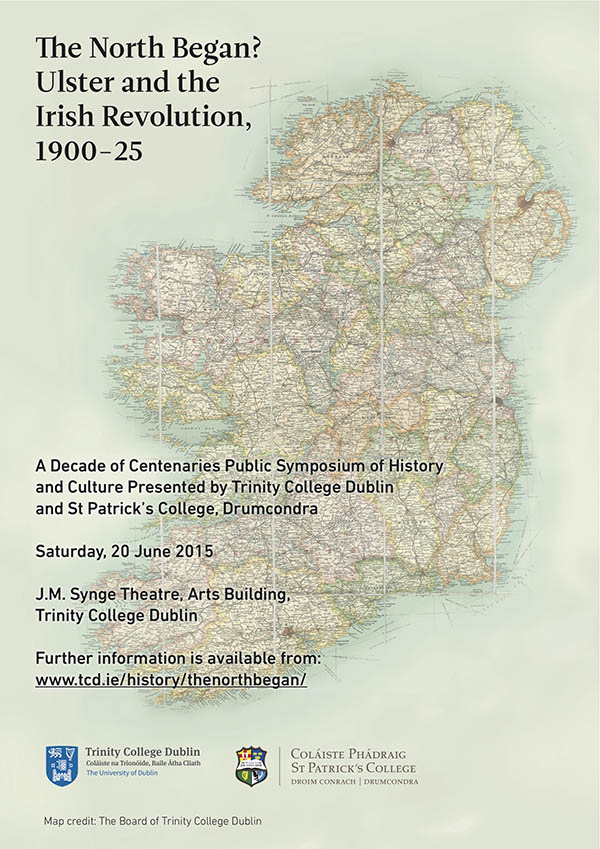 On Saturday 20 June 2015 Trinity College Dublin, in association with St Patrick’s College, Drumcondra, hosted a ‘Decade of Centenaries’ symposium entitled ‘The north began: Ulster and the Irish revolution, 1900-1925’. This public event explored the paradox that many of the individuals who revived Irish republicanism in the early twentieth century were from Ulster, yet were excluded from the 1916 pantheon. It also examined northern nationalist activists who migrated south, considering the formation of their nationalist identity and the consequences of their migration for them as individuals, for the new Irish Free State, and for nationalist communities in the new Northern Ireland.

Speaking prior to the event, Eunan O’Halpin (TCD) observed that ‘it is now time to reconsider the influence of prominent Northern political figures such as Eoin MacNeill, whose article “The North Began” in An Claidheamh Soluis in 1913 triggered the foundation of the Irish Volunteers, along with Seán MacEntee, Patrick McGilligan, Frank Aiken and Kevin O’Sheil. We also need to re-examine the influences and experiences of the many other men and women from Ulster such as Bulmer Hobson, General Dan McKenna, Mabel FitzGerald and Seán Lester who came south and made huge contributions in public service, business, the professions, the Garda Siochána, the defence forces or in family life…As we approach the centenary of the 1916 Rising it is a timely opportunity to reconsider the neglected experiences and influences of Northern republican activists who made their lives in the new Ireland after 1921. Their successful assimilation into the political, economic and cultural life of the Ireland has had the consequence that history has largely forgotten the difficult circumstances in which they left the North’.

The symposium was aimed at a general audience and featured a mix of academic discussion, the personal reflections of descendants of Northerners who migrated to the new Ireland and cultural interludes including a choir performance and poetry reading. It also focused on important new sources for studying this overlooked aspect of Irish history – the Bureau of Military History, the Ernie O’Malley notebooks, the Military Service Pensions and the O’Kane and Marron interviews. Click here for full details of the symposium.