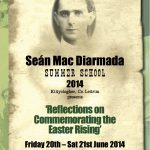 The theme of this year’s summer school was ‘Reflections on Commemorating the Easter Rising’. It is named after Seán MacDiarmada, who was born John McDermott in 1883 near Kiltyclogher, County Leitrim. Having joined the Irish Republican Brothehood (IRB) in 1906, Mac Diarmada became a close associate of Thomas J. Clarke, and became national organiser of the IRB in 1908, a position he held until his execution in 1916. In this capacity, Mac Diarmada was arguably the single most important individual involved in the planning and organisation of the Easter Rising of 1916. He fought in the GPO during the Rising and was one of the seven signatories of the 1916 proclamation. Along with the other six signatories, Mac Diarmada was executed in Kilmainham Gaol on 12 May 1916. Seán MacDermott Street in Dublin is named in his honour, as is the railway station in Sligo. The GAA grounds in Carrick-on-Shannon, Páirc Sheáin Mhic Dhiarmada, are also named after him. The family home was purchased by the state in 1964, and at the opening of the summer school Minister Deenihan announced that it was to recieve €150,000 in funding to facilitate its redevelopment.

Speaking in advance of the opening, Minister Deenihan noted that ‘the Seán Mac Diarmada homestead here is a wonderful resource, an important part of the history of the nation, and I am delighted to be able to announce that funding of €150,000 has been secured to make it more accessible to visitors. These works, funded by my department, will be taking place in conjunction with Leitrim County Council. Having seen the list of speakers, I am sure that this year’s summer school will be an entertaining and informative event. I hope that the ideas and recommendations expressed here can feed into the formulation of a programme for the commemoration of the Easter Rising in 2016’.

Download the programme for the 2014 Seán Mac Diarmada Summer School.