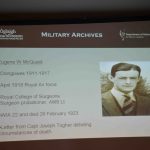 On Thursday 2 October Simon Coveney TD, Minister for Agriculture, Food, the Marine and Defence,launched the second release of files from the Military Service (1916-23) Pensions Collection in Cathal Brugha Barracks, Dublin. The Military Service Pensions project is a cornerstone project of the government’s commemorative programme. The collection contains almost 300,000 application files for pensions, allowances and medals as well as supporting documentation. The pension files were created following a decision of the Oireachtas in June 1923 to compensate wounded members of the IRA, National Army, Irish Volunteers, Irish Citizen Army, and other organisations, along with the dependents of deceased members of these organisations. Over time, this original remit was expanded by legislation to facilitate the granting of pensions to formerly active members of virtually all groups involved in the struggle for independence. A key element of the application process was the requirement that claims for pensions be verified, which means that the applications often contained extremely detailed accounts of activities undertaken in the various organisations that qualified for pension awards. The files are being released on a phased basis.

Speaking at the launch, Minister Coveney remarked that ‘the collection is an invaluable source detailing the personal details and the social background of the rank and file veterans, the leadership of the independence movement, as well as the societal circumstances of the time. The tragedy of the Civil War period is also laid bare with many records dealing with casualties and the plight of the families on both sides’.

This release consists of files relating to

over 1,100 veterans of the period 1916-1923, including ten relating to the Easter Rising, notably the dependents of Sean MacDiarmada, William Staines and Sean Furlong. Successful pension application files relating to senior officers of the IRA during the War of Independence and Civil War are also included, as is the pension application file and a surviving intelligence file for Denis ‘Sonny’ O’Neill. There are also a number of significant Cumann na mBan files, including that of Kathleen O’Connell who was secretary to Eamon de Valera. The project is overseen by a Steering Group comprising representatives of the Department of Defence and the Defence Forces, the Department of An Taoiseach, the Department of Arts, Heritage and the Gaeltacht, and the National Archives. The academic advisory committee to the project consists of historians Prof. Charles Townshend (Keele), Prof. Eunan O’Halpin (TCD) and Prof. Diarmaid Ferriter (UCD).