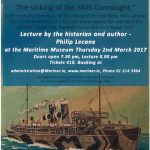 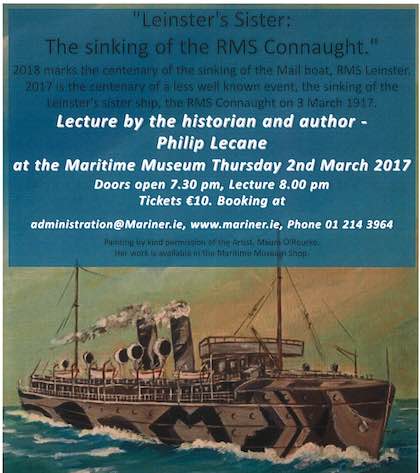 On Thursday 2 March the National Maritime Museum, Dun Laoghaire, Co. Dublin, hosted a lecture by Philip Lecane entitled ‘Leinster’s sister: the sinking of the RMS Connaught‘. Originally built for the City of Dublin Steam Packet Company, the Connaught was requisitioned for use by the Royal Navy during the First World War; the Connaught was sunk in the English Channel on 3 March 1917, while her sister ship Leinster was torpedoed outside Dublin Bay in October 1918

The lecture took place at 7pm in the National Maritime Museum.

From History Ireland: Philip Lecane on the sinking of the RMS Leinster.