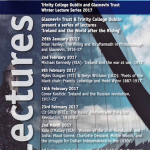 On Thursday 2 March 2017 Glasnevin Trust and Trinity College Dublin  presented the last in a series of lectures on ‘Ireland and the world after the Rising’. Kate O’Malley (RIA Documents on Irish Foreign Policy)  presented a lecture entitled ”Women of the Irish Revolution and India: Maud Gonne, Charlotte Despard, Mollie Woods, and the struggle for Indian independence in the 1930s’. In the aftermath of the Easter Rising and the Irish Revolution, the Irish struggle for independence inevitably caught the eye of nationalists in other parts of the British Empire, most notably India. But this wasn’t one way traffic: just as Indian nationalists such as Gandhi, Nehru and Bose took an interest in Ireland, so nationalists in Ireland took an interest in India, and in the 1930s sought to forge links with those whom they felt might be following in their footsteps. This lecture will look at three revolutionary women, all friends, all veterans of the post-1916 independence struggle, and all of whom are buried here in Glasnevin: Maud Gonne MacBride, Charlotte Despard and, in particular, Mollie Woods. These women encouraged Indo-Irish collaboration in the hope that each side could learn from their respective experiences. They were agitators who attempted to add an aspect of global finesse to local nationalist politics and successfully established their own tailor-made organisation in the shape of the Indian Irish Independence League (IIIL). This lecture will shed light on some lesser known aspects of Irish and Indian history between the World Wars, and on the significance of the Irish revolution within the wider history of the British Empire