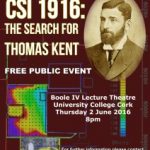 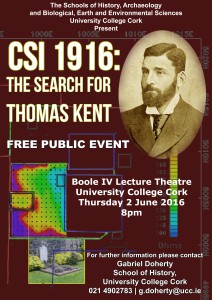 On Friday 2 June UCC hosted an event examining the science behind the recovery and identification of the remains of Thomas Kent (1865-1916), of Castlelyons, County Cork, the only one of the sixteen figures executed after the 1916 Easter Rising for involvement in armed action outside Dublin. Following his execution on 9 May 1916 in what was then Cork Military Detention Barracks. Kent’s remains were laid in a grave within the grounds of the facility. Following the creation of the Irish Free State in 1922, control over the barracks was transferred to the new Irish government. Over time uncertainty grew as to the precise location of the grave, uncertainty that was accentuated by the fact that the Military Detention barracks were converted into a civilian prison, thereby preventing free access to the site. Following the decision to close Cork prison, renewed efforts were made in 2015 to locate the remains, and it is these efforts that form the focus of the event in UCC. Two expert speakers addressed the subject from differing perspectives: Tom Condit is an archaeologist employed by the National Monuments Service of the Department of Arts, Heritage and the Gaeltacht, and undertook the archaeological investigations of the site in Cork prison. His talk addressed the challenges posed in identifying the probable site of the remains of Thomas Kent – which included the use of different types of geophysical survey techniques – as well as the details of the excavation process itself. Jens Carlsson is a lecturer in the School of Biology and Environmental Science, University College Dublin, who undertook the process of verifying that the remains located by the archaeological excavation were, indeed, those of Thomas Kent. In his words, ‘Thomas Kent’s identity was confirmed through genetic analyses. Many have heard about genetic identification methods used by forensic laboratories across the world. However, the Thomas Kent case turned out to be a very challenging task that demanded development of novel genetic identification methods.’