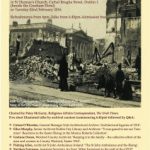 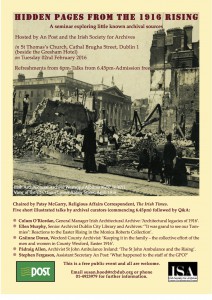 On Tuesday 2 February 2016 the Irish Society for Archives in conjunction with An Post hosted a seminar: Hidden Pages From the 1916 Rising, at which five archival curators engaged with the public to explore some of the little–known archival sources about this momentous event. The seminar took place at the Church of St George and St Thomas, Cathal Brugha Street, Dublin 1 on Tuesday the 2nd of February 2016 with refreshments from 6pm and talks commencing at 6.45pm approximately. This Church of Ireland church (located alongside the Gresham Hotel) was rebuilt in the 1930s following the destruction of an older church (originally located in Marlborough Street) during the Revolutionary period in 1922.

Five short illustrated presentations were delivered, after which the audience were invited to engage in dialogue in a question and answer session. Colum O’Riordan, General Manager of the Irish Architectural Archive visually illustrated the ‘Architectural legacies of 1916’; Ellen Murphy, Senior Archivist at Dublin City Library and Archives, revealed ‘Reactions to the Easter Rising in the Monica Roberts Collection at Dublin City Library and Archive’ under the heading: “It was grand to see our Tommies”. Moving beyond Dublin to the Rising in provincial Ireland, Wexford County Archivist, Grainne Doran examined ‘The collective effort of the men and women in County Wexford, Easter 1916’. The emergency medical response to events wasdiscussed by Pádraig Allen, through the archives of the St John Ambulance Ireland, and finally Stephen Ferguson, Assistant Secretary at An Post explored the experiences of ‘The staff of the GPO during Easter Week, 1916.

The 1916 seminar followed a similar event organised by the Society last year on ‘Hidden Pages of the First World War’, in collaboration with St Patrick’s Cathedral. The seminar and dialogue was introduced and chaired by Patsy McGarry, Religious Affairs Correspondent of The Irish Times.