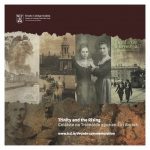 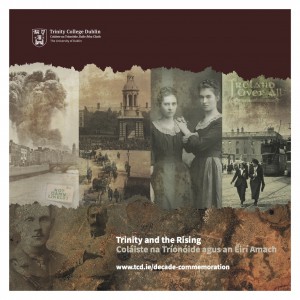 On Wednesday December 2 2015 the Minister for Arts, Heritage and the Gaeltacht, Heather Humphreys TD, launched Trinity College Dublin’s programme of events for the 1916 centenary in the Long Room of TCD’s Old Library. The programme of events organised by staff, students and alumni of Trinity to mark the 100th year anniversary of the Easter Rising will form part of the official State programme for next year. Trinity’s programme will explore the 1916 Rising from a variety of disciplines and perspectives and will include lectures, tours, online courses, debates, readings, plays, films, conferences and exhibitions. Highlights of Trinity’s programme include:

A public reading of the 1916 Proclamation on the steps of the Dining Hall on Tuesday, March 15th 2016 and an accompanying conference organised by Trinity Long Room Hub examining the national and international context of the Proclamation.

A series of lectures on the theme of ‘Literature and Revolution’ by the School of English, which will run from January to March 2016.

Trinity’s Hist, the oldest student debating society in the world, will host a debate featuring famous past members on the motion “This House Believes The Rising Should be Celebrated” on Wednesday, 24 February 2016.

Exhibitions including the ‘The Civilian Dead’ exhibition in the Pearse Street Library opening in January 2016, which will commemorate the civilians who died as a consequence of the Rising.

The Changed Utterly blog hosted by Trinity Library showcases on a weekly basis first-hand accounts of the Rising written by ordinary people, from dramatic ‘as-it-happened’ accounts to carefully amassed scrapbooks.

Speaking at the launch, Minister Humphreys said that ‘academic discussion and debate will form a very important element of the Ireland 2016 Centenary Programme. Our third level institutions will be focal points as we look back at what life was like in 1916, examine what motivated the 1916 leaders and consider what has been achieved over the last 100 years. I am delighted that Trinity College has put together this extensive programme. As a centre of learning in Dublin city centre, Trinity will act as a hub of activity and analysis as we mark the centenary of the Easter Rising.’. Vice-Provost and Chief Academic Officer, Professor Linda Hogan added that ‘Trinity is delighted to be part of the big national conversation about the 1916 Rising. The programme will not only provide dispassionate historical analysis of the events, motives and consequences associated with the Rising it will also, through the medium of film, theatre, exhibition and online courses, provide expression to alternative viewpoints that will serve to illuminate pre-conceived ideas about the Rising’. Eunan O’Halpin, Professor of Contemporary Irish History, commented that  ‘Trinity was at the epicentre of the Rising that shook Ireland and the world in the round. Located in the heart of Dublin city centre, the campus became at once a bastion, a rallying point for Crown forces, and a place of succour for the wounded and the dying. Trinity is also the custodian of significant records relating to the rebellion including accounts of the Rising through civilian eyes including the celebrated diary of Elsie Mahaffy, the Provost’s daughter’.

The booklet Trinity and the Rising. launched by Minister Humphreys also containes a series of articles by Trinity staff and academics including pieces on Trinity’s role in the debates running up to the 1916 Rising and after, Trinity Library’s collection of 1916 related material and how the Rising affected students attending the college.

Click here for full details of the TCD 2016 centenary programme and to download the accompanying booklet, Trinity and the Rising.