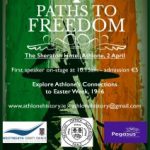 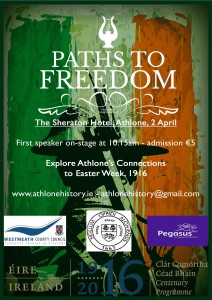 On Saturday 2 April 2016, The Old Athlone Society hosted ‘Paths to Freedom’, a day of talks that explored the history of the Easter Rising from both a national and local perspective.

The event, held in the Sheraton Hotel, Athlone, was part of Westmeath County Council’s 1916-2016 programme of events. The varied talks explained aspects of the Rising that are less well-known, while also highlighting some of the surprising links between Westmeath and the events of Easter 1916. Speakers included Turtle Bunbury, John Burke, Myles Dungan, Liz Gillis, Ian Kenneally, and Gearóid O’Brien.

Explore the full programme and learn more about The Old Athlone Society.