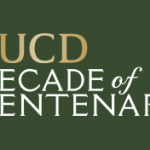 On Thursday 2 April 2015 the Minister for Arts, Heritage and the Gaeltacht, Heather Humphreys TD, visited UCD Archives to officially launch the UCD Decade of Centenaries programme. The UCD programme to commemorate the ‘Decade of Centenaries’ is, to date, the most comprehensive programme of its kind to be developed by any university. As a major holder of archives of national and international significance relating to the period 1912-1923, UCD is commemorating the events of the revolutionary period in order to inform national debate and understanding, and is organising and wide range of events and developing a number of educational and cultural resources to this end. Minister Humphreys said that ‘the scale, ambition, depth and breadth of the UCD commemorations forms a seminal part of the national programme’. Many staff, students and graduates of UCD played pivotal roles in the Irish revolution, such as Thomas MacDonagh, assistant professor of English and signatory of the 1916 proclamation; Eoin MacNeill, professor of early and medieval Irish history and chief of staff of Irish Volunteers; and Agnes O’Farrelly, lecturer in Modern Irish and founder of Cumann na mBan. Well-known graduates who were active in the revolutionary period included Louise Gavan Duffy, Thomas Kettle, Francis and Hanna Sheehy Skeffington, Patrick Pearse, Jack and Geraldine Plunkett (the siblings of Joseph Mary), James Ryan, Kevin Barry, Kevin O’Higgins, Ernie O’Malley and Richard Mulcahy.