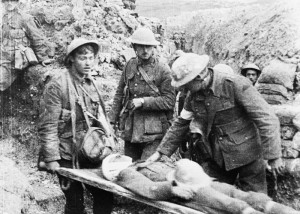 Throughout July 2016 the National Museum of Ireland Decorative Arts and History, Collins Barracks, Dublin 7, hosted screenings of UNESCO listed film The Battle of the Somme as part of its Somme centenary events programme. These were hosted under the auspices of the Imperial War Museum’s Centenary Partnership. Shot and screened in 1916, it was the first feature length documentary about the war and changed the way both cinema and film was perceived by the public. In the year of its release around 20 million people across Britain and Ireland watched The Battle of the Somme, many hoping to see the image of a loved-one, or friend captured on film.  One hundred years later, this unique film from IWM’s collection, was being shown to commemorate the anniversary of the Battle of the Somme. Each screening in the AV theatre in Collins Barracks was accompanied by a short introduction from a historian on the Battle of the Somme. Admission was free. The full schedule of screenings was as follows:

Watch British Pathé’s online exhibition of footage relating to the Battle of the Somme.