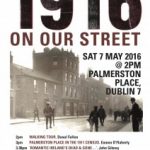 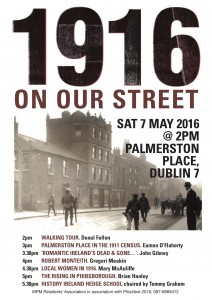 On Saturday 7 May Mountjoy Street, Palmerston Place and Middle Mountjoy Street (MPM) Residents’ Association (in association with Phizzfest and Dublin City Council) presented a community history event entitled ‘1916 on our street’, on Palmerston Place (off the top of Dominick Street), Dublin 7. This explored the connections of the neighbourhood with the 1916 Rising. From the origins of Ireland’s ‘secret revolutionary organization, the Irish Republican Brotherhood’ in the 1860s — John O’Leary published the Irish People from 16 Palmerston Place — to Roger Casement’s doomed attempt to recruit a brigade of Irish British Army POWs for our ‘gallant allies in Europe’ — his organizer in Germany, Robert Monteith, once lived in 6 Palmerston Place — this afternoon of lectures and a walking tour concluded with a History Ireland Hedge School debate on the Rising. The full schedule is:

From Century Ireland: Church Street and the Four Courts in 1916.