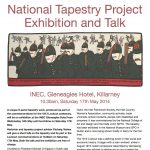 The 1913 Lockout Tapestry, produced as part of the centenary commemoration of the 1913 Lockout centenary, was on display at the INEC Gleneagles Hotel, Killarney, Co. Kerry, from Wednesday 14 May until Saturday 17 May. Historian and project advisor Padraig Yeates gave a short talk on the tapestry and its part in the Lockout commemorations on Saturday 17 May. Both the talk and the exhibition are free of charge.

The tapestry was designed by artists Cathy Henderson and Robert Ballagh, and was produced by 200 adult volunteers and over 60 schoolchildren. It was unveiled in Dublin by President Michael D Higgins  last September.  This remarkable and unique Irish work of art was produced by a diverse range of groups including the Irish Embroidery Guild, the Irish Patchwork Society, the Irish Country Women’s Association, community activists, trade unionists, school students, people with disabilities, and prisoners. It was commissioned by the National College of Art and Design and the trade union SIPTU.

The tapestry was previously exhibited in the National Museum, Collins Barracks, and the GPO in Dublin. This was the first occasion on which it was on display in Kerry.

To watch a short documentary about the tapestry, click here