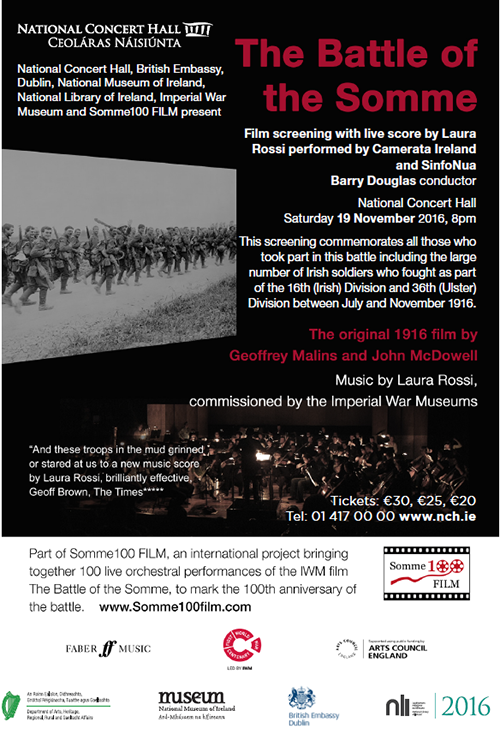 On Saturday 19 November 2016, to mark the centenary of the end of the battle of the Somme, the iconic 1916 UNESCO-listed historical film The battle of the Somme, by cinematographers Geoffrey Malins and John McDowell, was shown on screen accompanied by Laura Rossi’s acclaimed score performed live by orchestras Camerata Ireland and SinfoNua under the baton of conductor Barry Douglas.

This screening commemorated all those who took part in this battle including the large number of Irish soldiers who fought as part of the 16th (Irish) Division and 36th (Ulster) Division between July and November 1916. It also incorporated a History Ireland ‘Hedge School’ debate.

Laura Rossi’s score, which was commissioned in 2006 to mark the 90th anniversary of the Battle of the Somme, was premiered to a full house at the Queen Elizabeth Hall, receiving a 5 star review in The Times. The Battle of the Somme’s importance was recognised in 2005 by its formal inscription in the UNESCO ‘Memory Of The World’ register. Learn more and book tickets here.

Watch British Pathé’s online exhibition of footage relating to the Battle of the Somme.