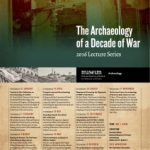 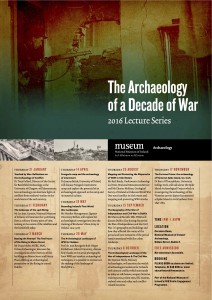 On Thursday 19 May 2016 Ms. Heather Montgomery (QUB) gave a lecture entitled ‘Recording Ireland’s First World War landscapes’, as part of the ongoing ‘Archaeology of a decade of war’ series, hosted as part of the National Museum of Ireland’s 1916 public engagement programme. This lecture will describe archaeological investigations into the training of Kitchener’s New Army in Ireland, 1914-1918. This research brings together historic evidence relating to the British military training, and the archaeological analysis of advances in twentieth century warfare, and social and cultural elements of the period.

Post Views: 276
Posted in 2016 events, Dublin, Events in May 2016, Ireland and the World, Lecture Series, National Museum, Past