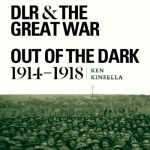 26 June 2014 Merrion Press, an imprint of Irish Academic Press, launched Ken Kinsella’s Out of the dark, 1914-1918: South Dubliners who fell in the Great War. This is a detailed social history of Irish casualties of the First World War from South County Dublin, and consists of individual biographies of those killed in the war grouped together by locality.

The book was launched by Dr. Myles Dungan of RTÉ in the County Hall, Dún Laoghaire, Co. Dublin, on 26 June 2014 at 7.30pm. The event also marked the opening of the exhibition ‘DLR and the Great War’.