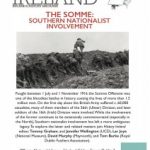 On Tuesday 19 July the National Library of Ireland hosted a History Ireland ‘Hedge School’ debate, on the subject of ‘The Somme: Southern nationalist involvement’. Fought between 1 July and 1 November 1916 the Somme offensive was one of the bloodiest battles in history, costing the lives of more than 1.5 million men. On the first day alone the British Army suffered c. 60,000 casualties, many of them members of the 36th (Ulster) Division, and later soldiers of the 16th (Irish) Division were involved. While the involvement of the former continues to be extensively commemorated (especially in North Ireland), Southern nationalist involvement has left a more ambiguous legacy. Exploring this and related matters were History Ireland editor, Tommy Graham, and Jennifer Wellington (UCD), Lar Joye (National Museum), David Murphy (Maynooth University), and Tom Burke (Royal Dublin Fusiliers Association).

Stream or download a recording of the Somme Hedge School.