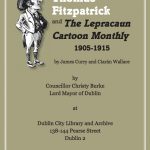 On Thursday 19 February, the Lord Mayor of Dublin, Cllr. Christy Burke, launched Thomas Fitzpatrick and the Leprecaun cartoon monthly, 1915-1915′, by James Curry (NUIG) and Ciaran Wallace (TCD). This is the latest publications being released as part of Dublin City Council’s ongoing ‘Decade of Commemorations’ series. The Lepracaun cartoon monthly was an important satirical magazine, published in Dublin from 1905 to 1915. Its cartoons give a valuable social and political commentary on a ten year period of great upheaval in the run-up to 1916 and the Easter Rising. Many of these have become iconic images, dealing with the 1913 Lockout, the Suffragist movement, and the First World War. Its proprietor, editor and chief cartoonist Thomas Fitzpatrick (1860-1912) already had a distinguished career drawing for leading publications in Dublin and London. Introductory essays on his life and career, and on the social and political context of the times, complement the detailed captions which accompany each image. A foreword by Jim FitzPatrick, artist and grandson of Thomas Fitzpatrick, adds a personal note to the volume, and a colourful frontispiece by Conánn Fitzpatrick updates the original cover of The Leprecaun.

Explore Dublin Public Libraries’ online exhibition on the Leprecaun cartoon monthly and the 1913 Lockout, and this interactive video report from RTÉ.