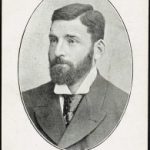 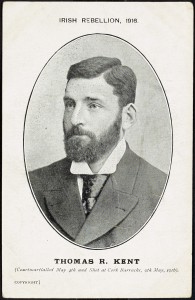 On 18 September 2015 the state funeral of Thomas Kent (1865-1916) took place in Castlelyons, Co. Cork. Thomas Kent and his brother William Kent were arrested following a RIC raid at the family home on 2 May 1916, in the aftermath of the Easter Rising. Their brother Richard was wounded trying to escape and died shortly after. Thomas and William were tried by courts-martial at Cork Detention Barracks. William was acquitted, but Thomas was sentenced to death and was executed in Cork on 9 May 1916. He was unmarried.

Kent was one of the 16 men executed in 1916 following the Easter Rising and, with Roger Casement, was one of only two executed outside Dublin. An Taoiseach, Enda Kenny TD, offered the honour of a state funeral to the Kent family earlier this year and the family accepted. The remains of Thomas Kent were exhumed in Cork Prison in June. Given the passage of time and the lack of formal records regarding his grave, DNA testing undertaken by the State Pathologist’s Office, the National Forensic Coordination Office at the Garda Technical Bureau, Forensic Science Ireland and the UCD Science Faculty was required to confirm that the remains were indeed those of Thomas Kent.

Speaking prior to the funeral, the Taoiseach remarked that ‘the government is very glad to offer this honour of a State Funeral in memory of the sacrifice of the late Thomas Kent. Thomas Kent was one of many young men who, in pursuit of the goal of Irish freedom, paid the ultimate sacrifice. The state funeral, which will take place on 18th September 2015 in Castlelyons in Cork, will ensure that Thomas Kent is never again described as a forgotten leader of 1916. Most importantly from his family’s viewpoint however, his re-interment will ensure that he will finally be at rest with his brothers and other family members in Castlelyons’.

From Century Ireland: watch RTÉ’s coverage of the state funeral.

From the National Library of Ireland: Thomas Kent.