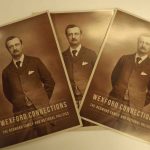 To mark the centenary of the final passage and suspension of the Government of Ireland 1914—the ‘Home Rule Bill—on Thursday 18 September 2014 at 7.00pm in Wexford Town Library Dr. Pauric Travers (St. Patricks College) gave a lecture entitled ‘Ireland’s Home Rule Bill and John Redmond, MP’. This located the passage of the Home Rule Bill in its historical context, examine John Redmond’s role in its development and passage, its significance for his historical legacy, the opposition it encountered, how it was perceived in Ireland, and the impact of both World War One and the 1916 Rising on that perception.

A brochure was also launched on John Redmond and his Wexford connections.

Read a short biography of John Redmond, from UCC Multitext.