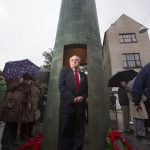 John Condon, nephew of Private John Condon, at the unveiling of the monument to his uncle in Waterford.

The John Condon Memorial was unveiled at Cathedral Square on Sunday 18 May 2014. Created by Artist Pat Cunningham, the sculpture stands over four metres in height and is now positioned on the Western side of Cathedral Square, in Waterford City’s Viking Triangle. It is named in honour of the youngest recorded Allied soldier killed in the First World War, Private John Condon, from Wheelbarrow Lane, Ballybricken. Known as the ‘Boy Soldier’, Private Condon was killed in the Second Battle of Ypres, Belgium, on 24 May 1915 at just fourteen years of age. His final resting place is the British war cemetery at Poelcapelle in Belgium.

The monument was unveiled at 3pm on Sunday 15 May. The ceremony began with a series of hymns sung by Waterford Schools Choir and City of Waterford Brass, conducted by Julie Quinlan. Liam Walsh, principal of Waterpark Primary School undertook the welcoming address and Andrew Holden narrated an extract from ‘The Visitor’ by Michael Edwards. The monument was then unveiled, and received an interdenominational blessing by Rev. Jim Wallace, Fr. Paul Waldron and Rev. Dr. John Parkin. A presentation and lowering of the standards was undertaken by members of the Irish Naval Service Reserve, along with a number of other organisations, including the Organisation of National Ex-Servicemen and Women, and the Royal British Legion. Following this, the Last Post was sounded. This was then followed by a number of readings, a minutes silence, and the laying of wreaths, before the ceremony concluded with the National Anthem.

Waterford City Council and the John Condon Memorial committee, led by Cllr. Tom Cunningham, saw its fifteen-year project to erect the memorial concluded at Sunday’s event. According to Cllr. Cunningham, ‘some 4,800 people from Waterford city and county fought in World War One and over 1,100 of them perished and a number of people felt that they been airbrushed from history and should be remembered here in the city, so that’s where the idea for the memorial came from. And although it’s named after the iconic figure of John Condon – the Boy Soldier- the youngest recorded casualty on the Allied side in World War I, it is dedicated to all men and women from Waterford who died in armed conflict including in our own War of Independence’.

In his address, Mayor John Cummins said that ‘the young John Condon was every bit as real as any of us here today. He had a mother and father, brothers and sisters. He went to school. He joined the army, partially for the adventure and partially because it was the only place he could get a job. He was a city boy who dreamt of better times. 1,000 years beyond the founding of Waterford , Ireland’s oldest city, men women and children from Waterford fought and died in the first Great War, the War to end all wars, and today one hundred years after this event we are proud to unveil this monument to welcome them back onto our collective memory. As Mayor of Waterford, on behalf of the city I would like to thank the Condon family for this most generous gift of memorabilia associated with young John Condon – and I would like to take this opportunity to encourage you all to visit the Bishop’s Palace where this material is on display’.

Post Views: 83
Posted in 2014 events, Ireland and the World, Munster, Past, World War One