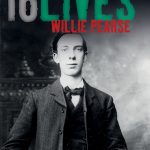 2015 at 6pm Hodges Figgis bookshop, on Dawson St, Dublin 2, hosted the launch of the latest volumes in the O’Brien Press ’16 Lives’ series. The series was launched in 2012, and consists of biographies of the 16 men executed for their involvement in the Easter Rising of 1916.

The two volumes released in March 2015 are Con Colbert, by John O’Callaghan; and Willie Pearse, by Róisín Ní Ghairbhí.

Explore the National Library of Ireland’s online exhibition The 1916 Rising: personalities and perspectives.