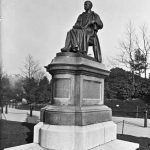 On January 18 2014 a concert took place in All Saints’ Church, Raheny, Dublin 5, to mark the centenary of the death of Arthur Edward Guinness (1840—1915), Baron Ardilaun. A grandson of the brewer Arthur Guinness, he was born at the Guinness estate of St Anne’s, Clontarf, which remained his principal Dublin residence in later life. Between 1868 and 1877 he headed the Guinness brewery alongside his younger brother Edward, and oversaw a massive expansion of its operations. A tory and unionist in politics, Arthur Edward Guinness also served intermittently as MP for Dublin City, and in later life he was noted for philanthropic endeavours, most especially urban renewal in Dublin. He served as president of the Dublin Artisans’ Dwellings Company, and provided funds to complete the restoration of Marsh’s Library and the reconstruction of the Coombe maternity hospital; his most notable legacy was the renovation and landscaping of St Stephen’s Green, which was then presented to the city of Dublin.

The memorial concert in All Saints Church (the construction of which was paid for by Arthur Edward Guinness) featured a programme that includes a number of new works based on poetry from the era of the First World War. It formed the backdrop for the launch by Minister of State Aodhan Ó Ríordán of a new Music Education and Development Project aimed at encouraging young people from North Dublin to engage with choral and music development. Speaking in advance of the concert, the rector of All Saints’, Rev. Norman McCausland, stated that ‘the Ardilaun Music project will provide opportunities for choral development especially with young people while also engaging with traditional Irish music performers and composers. This will be a major addition to the cultural life of north Dublin and we are delighted to make this contribution to the Decade of Centenaries’.