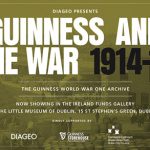 On Wednesday 18 February 2015 an exhibition dedicated to Guinness employees who served in the First World War opened in The Little Museum of Dublin. Broadcaster Gay Byrne, whose father fought in the war and was later employed by Guinness, launched the Diageo Guinness World War One Archive exhibition at the Ireland Funds Gallery in the Little Museum.

The exhibition details the experiences of Guinness employees who joined the British armed forces during the First World War through the letters, images, journals and artefacts. The key themes of the exhibition are impact of the conflict on the lives of the individual employees, and the contribution of company itself to the war effort. The content from the exhibition comes from the Guinness Archive located in the Guinness Storehouse at St James’s Gate in Dublin. The exhibition includes the original Roll of Honour produced by the company to preserve a record of those employees who fought in the British armed forces during the First World War. Over 800 Guinness employees enlisted, and perhaps 103 of them died during the war.

Gay Byrne, whose father worked in Guinness after the war, observed that ‘this exhibition is of exceptional significance and is entirely unique because it is the story of a war seen through the eyes of individual men and their families and also through a patriarchal company that had a major influence on employees’ lives, endeavouring to provide for those who went to war and to make a meaningful contribution to the war effort’.

Guinness made special allowance for employees who joined the armed forces, paying half wages to the soldiers’ families at home and guaranteeing their jobs when they returned. The war also affected the daily operations of the brewery, as the company lent and sold horses and motor vehicles to the military authorities. Guinness also lost a steamship, the SS W.M. Barkley, on October 12, 1917 when it was torpedoed and sunk off the Kish Lighthouse at the mouth of Dublin Bay. Five Guinness crewmen died and seven were rescued.

From History Ireland: A review of My father’s war.