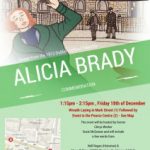 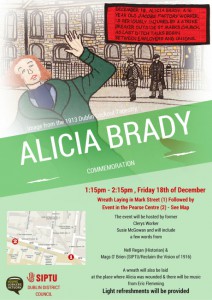 On Friday 18 December 2015 a ceremony took place in Dublin to mark the anniversary of the death in 1913 of Alicia Brady. A member of the Irish Women Workers’ Union, Alicia was among the last people to die as a result of the social conflict surrounding the 1913 Lockout, having being hit by a ricochet from a revolver fired by a strike-breaker in December 1913.

A wreath was laid at 1.15pm on Friday 18 December in Mark Street, Dublin 2. This was followed by an event in the Pearse Centre on Pearse Street hosted by former Clerys worker Susie McGowan, which was addressed by Nell Regan and Mag O’Brien of SIPTU. The event was organised by SIPTU and the Young Workers Network.

From Century Ireland: The death of ‘Alice’ Brady.