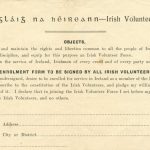 On Saturday 18 April from 2-4pm the National Museum of Ireland Decorative Arts and History, Collins Barracks, Dublin 7, hosted a re-enactment or the practice drills conducted by the Irish Volunteers between 1913 and 1916. The Irish Volunteers were founded in November 1913 as a nationalist militia that could act as a counterweight to the unionist Ulster Volunteer Force (UVF). The Irish Volunteers split in September 1914 over the issue of whether or not to support the British war effort in the First World War; a smaller, more militant faction retained the name ‘Irish Volunteers’, and later went on to provide most of the insurgent forces that participated in the Easter Rising of 1916. Between 1913 and 1916 the Irish Volunteers organised openly and trained in the use of rifles, and in military skills. The re-enactment took place between 2pm and 4pm in Clarke Square