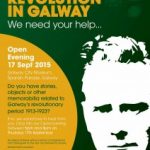 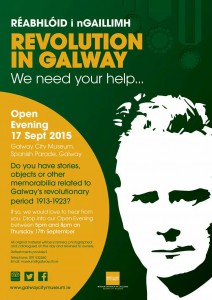 On Thursday 17 September Galway City Museum  hosted an open evening entitled ‘Revolution in Galway’, at which members of the public who had stories, memorabilia or objects relating to Galway in the revolutionary period (1913-23) were encouraged to share them with the museum. All original material was scanned and copied, and was returned to its owners. The open evening took place at Galway City Museum, Spanish Parade, Galway, from 5pm-8pm.

From History Ireland: read a review of Tomás Kenny’s Galway: politics and society, 1910-1923.