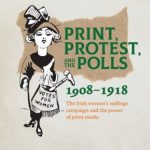 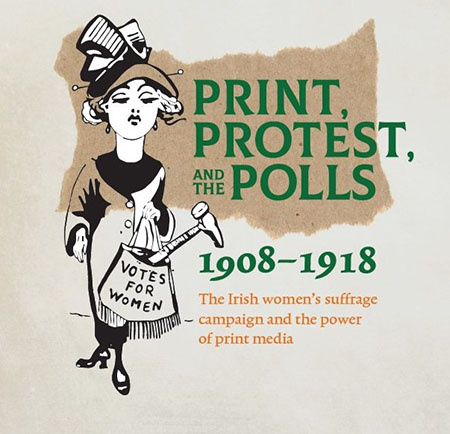 Beginning Thursday 17 May 2018 the National Print Museum, Beggars Bush Barracks, Haddington Road, Dublin 4, presented a new exhibition entitled Print, protest, and the polls: The Irish women’s suffrage campaign and the power of print media, 1908-1918. This exhibition will commemorate the centenary of the first female parliamentary vote in Ireland through exploration of the use of print media by the Irish suffragists, and their opponents, in their methods of promotion and protest. The exhibition aims to shine a light on a neglected period in Irish women’s history, while simultaneously exploring the powerful relationship between the contemporary political protest and the developing print media. The exhibition content included print ephemera, photographs, and newspaper publications which illustrated the influence and effect of protest through print in a period of early media. It demonstrated the role which the process of print played in the Irish fight for women’s rights to vote, and features print ephemera which has never before been exhibited publicly. The exhibition was curated by Donna Gilligan and is supported by Dublin City Council, Spera Brand Management, Smurfit Kappa Ireland, European Year of Cultural Heritage, Vermillion, Colorman and the National Library of Ireland. A full education programme, incorporating a number of artistic responses,  accompanied the exhibition throughout the summer.

Print, protest, and the polls: The Irish women’s suffrage campaign and the power of print media, 1908-1918 runs at the National Print Museum from 17 May to 30 September 2018. Admission is free.