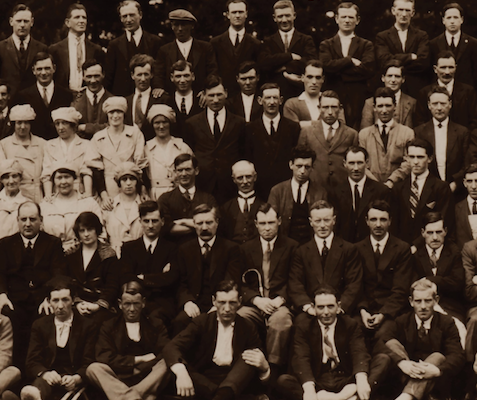 On Sunday 17 June 2017 Leopardstown Park Hospital hosted a concert to mark the centenary of its foundation in 1917. In October 1917 Gertrude Dunning gifted Leopardstown Park, a country manor set in 100 acres of parkland, to the British Ministry of Pensions, to be usedto treat soldiers who had been disabled while serving with the British forces. From the early stages of the First World War number of wounded and disabled soldiers returning to Ireland had overwhelmed the bed capacity of existing hospitals; more than 100 voluntary hospitals were established between 1914 and 1918 to meet this new demand. Uniquely among these hospitals, Leopardstown Park had been gifted in trust to the British government for as long as was needed to treat war pensioners. The house and grounds were considered ideal for the treatment of shell-shocked men, and it operated as a specialist hospital for shell shock until 1931 and was, after 1922, the only such hospital in the Irish Free State. From 1931 its services expanded to general medical and surgical care, as well as artificial limb fitting and maintenance. Though financed and managed by the British government, the vast majority of Leopardstown Park’s patients were Irish citizens. Having solely admitted British forces ex-servicemen for the first six decades of its existence, the number using it declined dramatically in the 1960s and the Irish and British governments successfully negotiated the transfer of Leopardstown Park Hospital to the Irish Department of Health in 1979. While its patient profile has evolved since then to provide medical services for older people in the South Dublin area, the hospital retains its close connection with the British ex-service community.

The concert began at 3.15pm and included performances by the Army No. 1 band and the band of the Royal Irish Regiment. Dr Eoin Kinsella’s history of the hospital, entitled, Leopardstown Park Hospital 1917 – 2017: A Home for Wounded Soldiers was also be officially launched on the day. The ceremony was attended by the British ambassador, Robin Barnett, and Heather Humphreys TD, Minister for Arts, Heritage, Regional, Rural and Gaeltacht Affairs. Speaking before the event, Minister Humphrey’s noted that ‘to the wounded and exhausted soldiers who returned home from the battlefields of World War One, Leopardstown Park Hospital was a place of solace and refuge…today’s ceremony is set in the context of significant State commemorations this year at home and abroad to mark the key events of the First World War in 1917. Almost every community on the island of Ireland was affected by these transforming events. The Decade of Centenaries has provided an opportunity to remember those who fought and died and to reflect upon the complex narratives surrounding Ireland’s participation in that War. By promoting commemorations that are inclusive and authentic and that seek to strengthen peace and reconciliation on the island of Ireland, we promote a deeper exploration of differing perspectives on our shared history’.

From the International Encyclopaedia of the First World War: Medicine and medical services in the war.