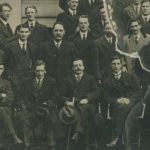 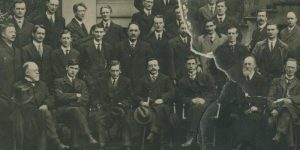 On Thursday 17 January 2019 the National Museum of Ireland – Decorative Arts and History, Collins Barracks, Dublin 7, hosted an afternoon seminar entitled ‘Marching on the Road to Freedom: Reflections on a Centenary: Dáil Éireann 1919’. As the museum launches a new exhibition of artefacts and documents on the First Dáil 1919, entitled ‘Marching on the Road to Freedom: Dáil Éireann 1919’, it brought together a broad range of academics, historians and curators to explore this key event in the development of modern Ireland. Speakers included Darragh Gannon (QUB), Liz Gillis, Sandra Heise (NMI), and Ruan O’Donnell (UL).

The seminar took place from 2-5pm.

From RTÉ Archives: The first Dáil.