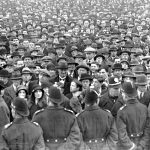 On 16 March 2015 Trinity College Dublin, in partnership with FutureLearn, relaunched its enormously successful MOOC (Massive Open Online Course) ‘Irish lives in war and revolution: Exploring Irish history, 1912-1923′, which was originally launched in May 2014. The course, which will be available via computers, mobile phones and tablets, invites learners to explore the lives of men, women and children living through war and revolution and examines the political and social changes that made modern Ireland. By engaging with original sources—textual, visual and aural— and encountering contradictory viewpoints, participants will also learn about the contested nature of history, along with the challenges facing historians. Professor Ciaran Brady, Dr Anne Dolan and Dr Ciarán Wallace from TCD’s School of Histories and Humanities will lead the course. According to Professor Brady, ‘our aim with the course is to question that there is a single narrative or an easy explanation of the past. We want to challenge the silent assumption that there can be one authoritative voice claiming to have all the answers. To that end, we have designed a course intended to stimulate in you a critical attitude towards the question of whose history gets recorded and sought out, and whose history, ultimately, gets told’.