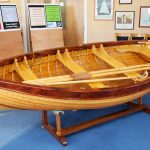 On Wednesday 16 July 2014 the Minister for Arts, Heritage and the Gaeltacht, Heather Humphreys TD, and the Director of the National Museum of Ireland – Raghnall ó Floinn, attended a ceremony at Howth Yacht Club in anticipation of the centenary of the Howth gun-running to accept the donation of a replica of the dinghy from the Asgard, the yacht used in the gun-running, and to announce the programme for the forthcoming commemoration of both the Howth gun-running and the subsequent killings on Bachelor’s Walk, which will take place on Sunday 27 July 2014.

To mark the centenary of the Howth gun-running of 1914 a local committee from the Howth area came together and undertook a number of projects. Over the winter of 2011—2012 six local volunteers— Walter McGuirk, Neville Maguire, Mike Alexander, Paddy Barry, Pat Murphy and Rory McGuirk—built, assembled and partly funded the rigging and spars used in the conservation of the Asgard, now on display at the National Museum of Ireland, Collins Barracks. For the centennial year of the gun-running, the same group has undertaken the construction of an exact replica of the Asgard’s dinghy. The Asgard was built in Norway in 1905 by Colin Archer, as a wedding present for Erskine and Molly Childers from the latters parents in Boston. Under the direction of John Kearon, it was meticulously restored to its original condition. However a notable missing component of the exhibit in Collins Barracks is the dinghy that was part of its original inventory.

Kearon and his colleague Ollie Ward began to build a replica of the dinghy from the original plans, but the project was halted shortly afterwards due to financial constraints. The six original volunteers then undertook the task. The committee raised the necessary funds, and Fingal master boat builder Larry Archer provided the technical expertise. George Elliott joined the team to apply the finishing touches. Individuals, clubs, organisations and businesses in Howth and surrounding areas contributed to the fundraising drive. The committee are now presenting the replica dinghy to the National Museum of Ireland, for display alongside the original Asgard. It will remain in Howth to be used in the centennial commemoration on 27 July before going on public display in Collins Barracks from 29 July 2014.

The director of the National Museum of Ireland, Raghnall ó Floinn, in paying tribute to the commitment of all those involved in the project, stated that ‘the National Museum of Ireland is delighted to accept the donation of the replica of Asgard’s dinghy and wishes to thank all those in Howth and the surrounding areas for their work in seeing the project through to completion, and in particular the Asgard Volunteer Group. This is truly a community effort combining solid research, local fund-raising, traditional boat-building skills and the enthusiasm of a dedicated team of volunteers. It will be a significant addition to the Museum’s exhibition’.

Speaking at the presentation of the replica dinghy to the National Museum at Howth, Minister Humphreys said ‘I am very grateful to the volunteers of Howth for their generosity in giving their time and expertise to assist us to commemorate this important event in our history. There is no doubt that the landing of arms in Howth was a significant milestone along the road to Easter 1916 and I am delighted to support arrangements to mark this centenary in an appropriate way’.

Click here for details of the commemoration on 27 July.

From Century Ireland: Watch the RTÉ news report on the presentation of the replica Asgard dinghy.

From UCD HistoryHub: The correspondence of Mary Spring Rice and Michael Joseph (‘The’) O’Rahilly on the early planning of the Howth and Kilcoole gun-runnings, May 1914.

Learn about the National Museum of Ireland’s Asgard exhibition. 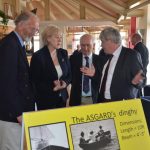 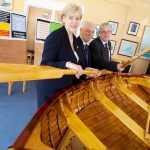 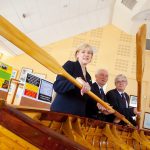