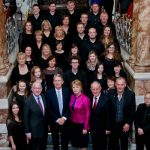 On Tuesday 16 December 2014 former president Prof. Mary McAleese gave a lecture in Iveagh House, Dublin, on the subject of the Christmas Truce of 1914. Professor McAleese’s address, the fifth in a series of commemorative lectures at the headquarters of the Department of Foreign Affairs and Trade, reflected on the centenary of the 1914 truce, when troops along Western Front – including soldiers from Ireland – laid down their arms in a series of unofficial temporary ceasefires at Christmas. It is one of a number of events being organised by the Department to commemorate the First World War. Prof. McAleese was welcomed by the Minister for Foreign Affairs and Trade, Mr Charlie Flanagan TD. Among the guests was the British Secretary of State for Foreign and Commonwealth Affairs, the Rt Hon Philip Hammond MP, who was in Dublin for an official visit.

The lecture was followed by a panel discussion, moderated by Dr John Bowman, with Prof. John Horne of Trinity College Dublin and Mr Don Mullan, founder of the Christmas Truce and Flanders Peace Field Project. Foreign Secretary Hammond also made a contribution to the evening’s discussion, which took place prior to a bilateral meeting with Minister Flanagan.

From the Imperial War Museum (UK): The Christmas Truce of 1914.

From Century Ireland: Football match in No Man’s Land on Christmas Day.