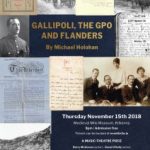 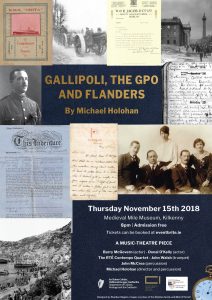 On Thursday 15 November 2018 the Medieval Mile Museum, Kilkenny, hosted a performance of composer Michael Holohan’s musical and theatrical piece ‘Gallipoli, the GPO and Flanders’. Drawing on the personal letters and diaries of both his paternal and maternal granduncles and the diary of a British soldier, the composer Michael Holohan has created a musical and literary journey, featuring the  stories and eyewitness accounts of Francis and Thomas Holohan, Seosamh de Brún and Samuel Henry Lomas and their experiences between 1914 and 1918, during the First World War and the Easter Rising. Francis Holohan served in the Merchant Navy, his brother Thomas Holohan served in the Royal Artillery on the Western Front, Seosamh de Brún was a member of the Irish Volunteers in the Jacob’s Garrison during the Easter Rising and Samuel Henry Lomas, as a lieutenant in the Sherwood Foresters, was involved in the suppression of the Rising and was present at the execution of some of the leaders.

Performers included the actors Barry McGovern and Donal O’Kelly, while the musicians will included RTÉ Contempo String Quartet, with John Walsh on trumpet,  Bernard Reilly on percussion and Michael Holohan on percussion and directing.

The performance took place at 8pm.