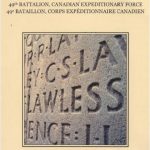 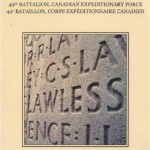 On Saturday 15 November Declan Beatty delivered an illustrated talk entitled ‘Fallen, Lost, Found: The Story of Private Thomas Lawless’ in Dublin City Library and Archive, 138-144 Pearse St, Dublin 2. Thomas Lawless was from Dublin and emigrated to Canada and fought in the First World War as part of the 49th Battalion, Canadian Army. He was killed near Avion in France in June 1917 but his body was not recovered. In 2003 construction workers uncovered the bodies of two Canadian soldiers south of Avion and in February 2011 Canadian forensic scientists identified one of these bodies as Private Thomas Lawless. He was re-buried in March 2011 in Vimy, France with full military honours in the presence of family members. The lecture dealt with the detailed forensic process used to identify him.