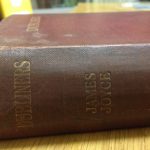 15 June 1914 marks the centenary of the publication of James Joyce’s seminal collection of short-stories, Dubliners. Joyce (1882-1941) originally began work on the collection in 1904, and it was largely completed by 1907. However, a series of legal wrangles with numerous publishers—including Grant Richards of London, who repudiated a contract with Joyce due to fears of legal action arising from some of the contents—delayed publication. Joyce claimed that the concept behind his hugely influential collection was an attempt to write what he described as ‘a chapter of the moral history of my country…I chose Dublin for the scene because the city seemed to me the centre of paralysis’.  After a number of rejections, Joyce entered into a second agreement with his original publisher, and Grant Richards published Dubliners on 15 June 1914.

In 2001 the National Library of Ireland developed the exhibition ‘Dubliners’, based on photographs taken by John J. Clarke between 1897 and 1904. To view the exhibition on Google Cultural Institute, click here.

Post Views: 90
Posted in 2014 events, Artistic and Cultural, Other Podcasts, Past