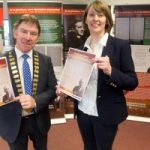 On Friday 15 January Cllr. Peter Roche, Cathaoirleach of County Galway, launched a new exhibition entitled From the archives, 1916: revolution and recollection at Cill Rónáin Library on Inis Mór. Presented as part of the County Galway 1916 centenary programme, Galway County Council Archives, the images relate in some way to the events or people involved in the 1916 Easter Rising. At the launch the Cathaoirleach said it was appropriate that one of the first events of the  Galway 1916 Centenary Programme was held on Inis Mór, as the islands and their culture influenced so many of those who participated in the Rebellion of 1916. He also stated that in the late nineteenth century ‘the islands attracted many visitors interested in the unbroken heritage of Gaelic language, beliefs and customs; this lead indirectly to the Gaelic Revival and the nationalist movement’.  Such visitors included Patrick Pearse and Thomas McDonagh, Eoin MacNeill, a leading member of the Gaelic League and co-founder of the Irish Volunteers, Agnes Winifred O’Farrelly, Liam Mellows and Bulmer Hobson.

Explore From the archives, 1916 online.