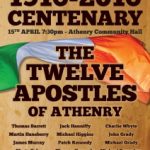 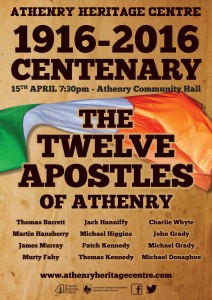 On Friday 15 April 2016 Athenry Heritage Centre presented ‘The Twelve Apostles of Athenry’, a centenary event commemorating the twelve Athenry men jailed for taking part in the Easter Rising in County Galway. The event included presentations by Conor MacNamara  (NUI Galway), and Kevin Jordan, who spoke about his new book ‘Rebellion In Athenry’; re-enactments; and music. It also incorporated the opening of an exhibition which will run until the end of June 2016.

The event will begin at 7.30pm. All welcome.

From History Ireland: Fergus Campbell on 1916 in County Galway.