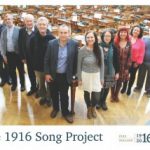 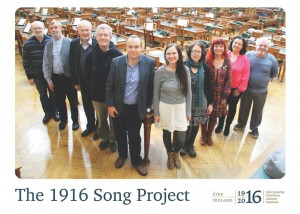 The 1916 song project is based around the principles of shared knowledge, support and co-operation. Since first meeting as a group in August 2015 singers have researched and composed a new body of songs in the traditional style relating to themes, events and figures connected to the Easter Rising.  New perspectives will be offered in a range of subjects, with diverse singing styles from around the country. The project will launch a new body of songs into the traditional song repertoire. The project includes singers from, and will subsequently tour to, places across the country where there was significant activity in Easter 1916. The premiere took place in the National Library prior to a nationwide tour.

Learn more about The 1916 song project.