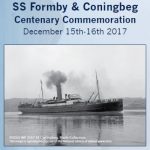 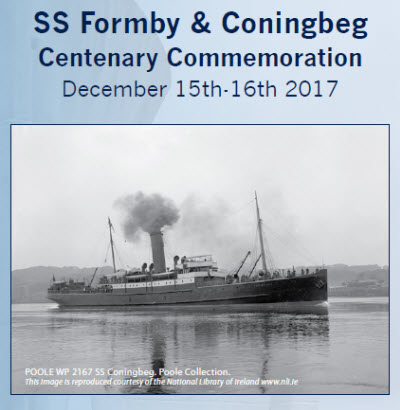 On Friday 15 and Saturday 16 December 2017, as part of Waterford Winterval, a series of commemorative events took place in Waterford city to mark the centenary of the loss of the Waterford steamships SS Coningbeg and  SS Formby torpedoed on a journey from Liverpool to Waterford in December 1917. The Formby left Liverpool around midday on 15 December and the Coningbeg left at 2.30pm on the 17 December. Both sank after being torpedoed in the Irish Sea by U-62.

The sinking of the Formby and Coningbeg in 1917 resulted in the loss of  67 people from Waterford and surrounding areas and was the biggest seafaring tragedy to affect Waterford in the twentieth century.  A memorial to those lost was erected on the quayside opposite Reginald’s Tower in 1997. The aim of the 2017 Centenary Commemoration wass to highlight Waterford’s shipping history during the First World War, and the lives and stories of those involved in the tragedy.