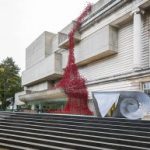 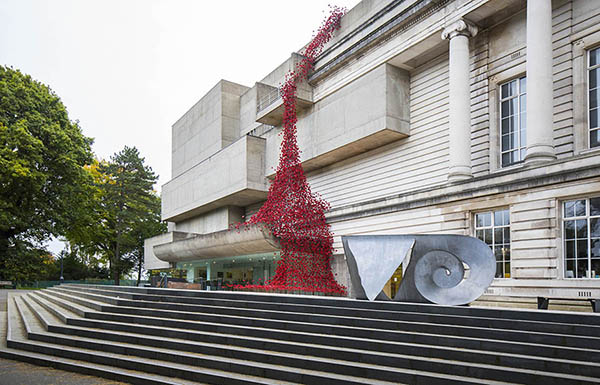 From Saturday 14 October to Sunday 3 December 2017 the Ulster Museum, Belfast, hosted Poppies: Weeping window by internationally acclaimed artist Paul Cummins and designer Tom Piper under the auspices of 14-18 NOW, the UK’s arts programme for the First World War centenary. The installation was at the Ulster Museum from 14 October to 3 December 2017, following a joint proposal by National Museums Northern Ireland and Belfast International Arts Festival. Weeping Window arises from the installation Blood Swept Lands and Seas of Red developed by Paul Cummins and Tom Piper, which was originally displayed at HM Tower of London from August to November 2014, where 888,246 poppies were displayed, to mark every death in the British and Colonial forces of the First World War. The two poppy sculptures being presented across the UK, together totaling over 10,000 poppies, have been saved by by the Backstage Trust and the Clore Duffield Foundation, and gifted to 14-18 NOW and Imperial War Museums with financial support from the Department for Culture, Media and Sport and the Heritage Lottery Fund.