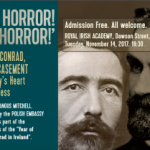 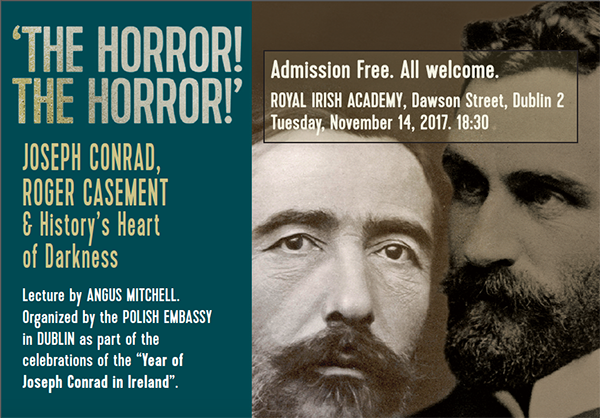 On Tuesday 14 November 2017 the Royal Irish Academy, 19 Dawson St, Dublin 2, hosted a lecture by Angus Mitchell entitled ‘”The horror! The horror!” Joseph Conrad, Roger Casement and history’s heart of darkness’. Poland’s greatest writer in the English language, Joseph Conrad, and Ireland’s multidimensional revolutionary, Roger Casement, shared a humble dwelling in Matadi, on the lower Congo, in 1890 before Conrad set off up-river on a journey that would inspire his canonical novella Heart of Darkness (1902). Later, they collaborated over a shared concern about the new slaveries and colonial violence that underpinned the industrial modernisation of imperial nations at the dawn of the twentieth century. But in 1916, Conrad rejected Casement during his trial for treason, for reasons that remain ambiguous. In this lecture, Angus Mitchell, who has edited numerous editions of Casement’s papers for publication, sought to explain the relevance of their friendship as a way to deciphering a work of literature that has come to define Western perceptions of Africa in often contentious and troubling ways.

The lecture was organized by the Embassy of the Republic of Poland in Ireland as part of the Joseph Conrad Festival in Ireland.

Explore the special edition of the University of Notre Dame’s journal Breac on Roger Casement.