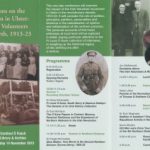 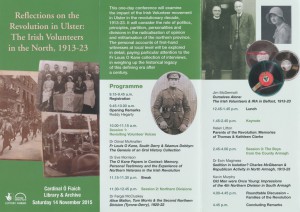 On Saturday 14 November the Cardinal Ó Fiaich Library and Archive, Armagh, hosted a one-day conference entitled ‘Reflections on the Revolution in Ulster: The Irish Volunteers in the North, 1913-23’. This featured a range of papers from historians who have listened to interviews carried out by Volunteer veterans half a century ago. The recordings in question were made by Fr Louis O’Kane, an Armagh archdiocesan priest, in the 1960s. After his death, the tapes were kept secure by the late Cardinal Tomás Ó Fiaich at Maynooth and Armagh. The recordings were digitised in 2013 and have since been available to researchers at the Ó Fiaich Library and Archive.

In the keynote lecture, Helen Litton spoke about ‘Parents of the Revolution: Memories of Thomas & Kathleen Clarke’. Ms Litton is a grandniece of Kathleen Clarke and has written biographies of the Clarkes. This talk drew an interview that Kathleen Clarke gave to Fr O’Kane in 1968, over half a century after she lost both her husband and her brother (Ned Daly) in the post-Easter Rising executions. The other talks on the conference focused on key figures who were interviewed by O’Kane and their spheres of influence. Among the subjects featured were Tom Morris of south Derry; Alice Mallon and Cumann na mBan in east Tyrone; Séamus Dobbyn, Liam Gaynor and Belfast Volunteers; Charles McGleenan and north Armagh; Eddie Boyle, John McCoy and south Armagh/Louth. A paper on Fr O’Kane and the factors that motivated him to carry out his interviews opened the conference.

The conference was a flagship event of the Ó Fiaich Library and Archive’s Irish Volunteers Centenary Project, a two-year outreach initiative supported by the Heritage Lottery Fund. Roddy Hegarty, the Director of the Ó Fiaich Library and Archive, recognises how this funding has opened the collection to a wider audience: ‘I would like to thank the Heritage Lottery Fund for assisting this project. Its support has allowed these authentic voices of now-deceased men and women to be heard once again by new generations. The narrative of this pivotal period in Irish and British history is greatly enhanced by these accounts as the voices offer us fresh, original reflections on their role in the independence struggle of a century ago’.

Martin McDonald, interim Chairman of Heritage Lottery Fund NI Committee observed that ‘the material in this collection is of great historical importance and we were delighted to support this project to bring these stories back into the public domain. Hearing the voices of key figures involved in this complex period of our history is fascinating. Right across the UK we have been funding projects looking at the legacy of the First World War. In Northern Ireland we have also been funding projects exploring the other key events in the decade so we can improve our collective understanding of this turbulent time’.