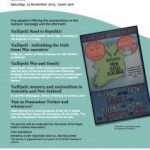 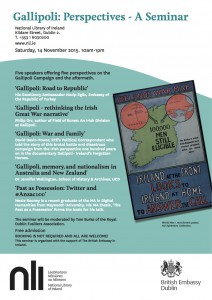 On Saturday 14 November 2015 the National Library of Ireland hosted a seminar offering five differing perspectives on the Gallipoli campaign. The speakers are, His Excellency  Necip Egüz (ambassador of the Republic of Turkey); Philip Orr (author of ‘ Field of Bones: An Irish Division at Gallipoli); David Davin Power (RTÉ); Jennifer Wellington (UCD); and Neale Rooney (Letters of 1916).

The seminar was organised with the support of The British Embassy in Ireland, and was moderated by Tom Burke of the Royal Dublin Fusiliers Association.

Post Views: 76
Posted in 2015 events, Archives, Artistic and Cultural, Dublin, Events in November 2015, Ireland and the World, National Library, Past, World War One