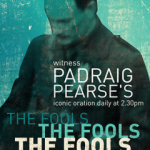 From 14 March to 11 October 2015 Glasnevin Trust hosted a daily re-enactment of the speech delivered by Patrick Pearse at the grave of Jeremiah O’Donovan Rossa on 1 August, 1915. This was to mark the centenary of the funeral of O’Donovan Rossa, and Pearse’s speech, with its famous refrain ‘the fools, the fools, the fools’, was a very deliberate statement made by Pearse on behalf of the Military Council of the Irish Republican Brotherhood (IRB) who were, at that time, planning what became the Easter Rising. While the preparations for the Rising were conducted in secret, the speech sought to bring the IRB out of the shadows in a very public assertion that in the Ireland of 1915 there were those who, as Pearse put it, had ‘been re-baptised in the Fenian faith’. In doing so it very consciously associated advanced nationalism, in the form of the Irish Volunteers, with the older republican tradition exemplified by the IRB.

The re-enactment took place daily at 2.30pm by an actor dressed as Pearse in full uniform.

From Century Ireland: Politicising Pearse: the making of an Irish revolutionary.