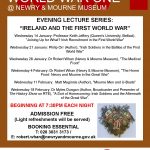 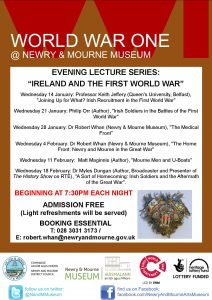 In January and February 2015, as part of a Heritage Lottery funded First World War Project, Newry and Mourne Museum is holding an evening lecture series on ‘Ireland and the First World War’. The speakers and lecture topics are as follows:

Wednesday 18 February: Dr Myles Dungan (RTÉ), ‘A sort of homecoming: Irish soldiers and the aftermath of the Great War’.

The lectures will take place at Newry and Mourne Museum, Bagenal’s Castle, Castle Street, Newry, BT34 2BY. Each talk will begin at 7:30 pm, but the final lecture will begin at 8pm to allow attendees to view the Museum’s travelling exhibition on local aspects of the war. Light refreshments will be provided at each lecture.