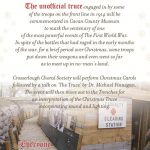 At 4pm on Sunday 14 December Cavan County Museum hosted an event to mark the centenary of the impromptu Christmas truce that took place along the Western Front during the First World War. Crosserlough Choral Society performed carols, which were followed by a talk on the Christmas truce by Dr. Michael Finnegan. The event then moved outdoors into the replica trenches recently opened at the museum, for an interpretation of the Christmas truce incorporating sound and lighting.

From the Imperial War Museum (UK): The Christmas truce of 1914.