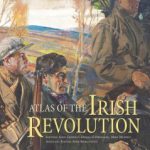 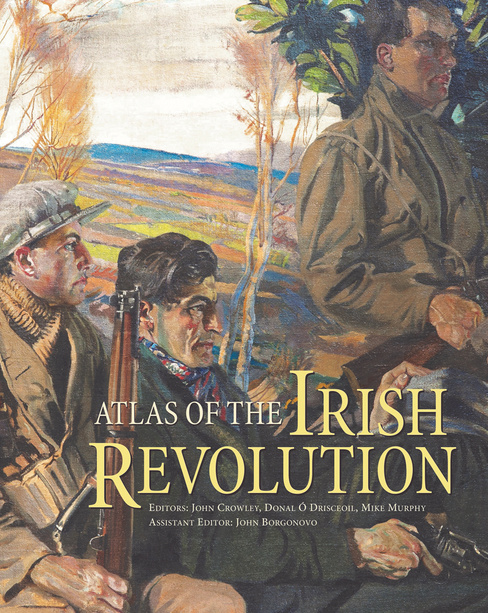 On Wednesday 13 September the Irish Architectural Archive, 45 Merrion Square, Dublin 2, hosted the launch of the Atlas of the Irish Revolution, edited by John Crowley, Donal Ó Drisceoil and Mike Murphy, with John Borgonovo, and published by Cork University Press.

The Atlas of the Irish Revolution is a landmark publication that presents scholarship on the revolutionary period in a uniquely accessible manner. Featuring over 350 original maps and 700 images, the Atlas includes 100 contributions by leading scholars from a range of disciplines, offering multiple perspectives on the pivotal years from the 1912 Home Rule crisis to the end of the Irish Civil War in 1923. Using extensive original data (much of it generated from newly-released archival material), researchers have mapped social and demographic change, political and cultural activity, state and non-state violence and economic impacts. The maps also portray underlying trends in the decades before the revolution and capture key aspects of the revolutionary aftermath. While the Irish revolution was a ‘national’ event, it contained important local and regional variations that were vital to its outcomes; the representation of island-wide trends stand alongside street-level, parish, county and provincial studies that uncover the multi-faceted dynamics at play.

The Atlas also captures the international dimensions of a revolution that occurred amidst the First World War and its tumultuous aftermath. Revolutionary events in Ireland received global attention because they profoundly challenged the British imperial project. Key revolutionaries operated transnationally before, during and after the conflict, while the Irish diaspora provided crucial support networks. The often neglected roles of women and workers are illuminated, as are the legacies of the revolution, including collective memories, cultural representations and historical interpretations. The Atlas of the Irish Revolution brings history to life for general readers and students, as well as academics. It represents a ground-breaking contribution to the historical geography of these compelling years of conflict, continuity and change.

The Atlas was launched by John Bowman (RTÉ); watch the RTÉ report on its publication.

Learn more about the Atlas of the Irish Revolution.